We have been thinking a bit about getting a bigger and faster tractor than the John Deere we have now.  Bill mows our lawn and it takes him over two hours.  With one of these zero turn tractors, he can cut that time in half.

Last year Bill bought our neighbor’s tractor when he rented his house out.  That is also a John Deere tractor but a two blade tractor with the engine up front.  We’ve always been impressed by the zero turn tractors. Both of my brothers have zero turn tractors.  How I let my two younger brothers “up” me on lawn mower riding tractors, I’ll never know.  My guard must of had my guard down.

We went down to Loew’s this morning to “just look” at riding tractors.  You know how that goes, “just looking.”  So many times I’ve “just looked” and ended up buying on the spot.  This house, my dog Horace, et al.

What propelled us into buying the John Deere today was free delivery.  That’s $79.00 saved right there!

Then we get a veterans discount of 10%, that was another $399.90.  We’ll take it!  And in fact, they said they could deliver it this afternoon, which they did!

Now the problem was how to use it.  Haim, (from Israel, not a Hispanic) the delivery man gave us a quick “how to” but me with my decreasing cognitive skills still didn’t grasped the sequence that I have to follow to start and run the tractor.  See the video below, which was not staged.  In fact this video was supposed to show me taking off IMMEDIATELY but you know how that goes.  Oh well, reality. 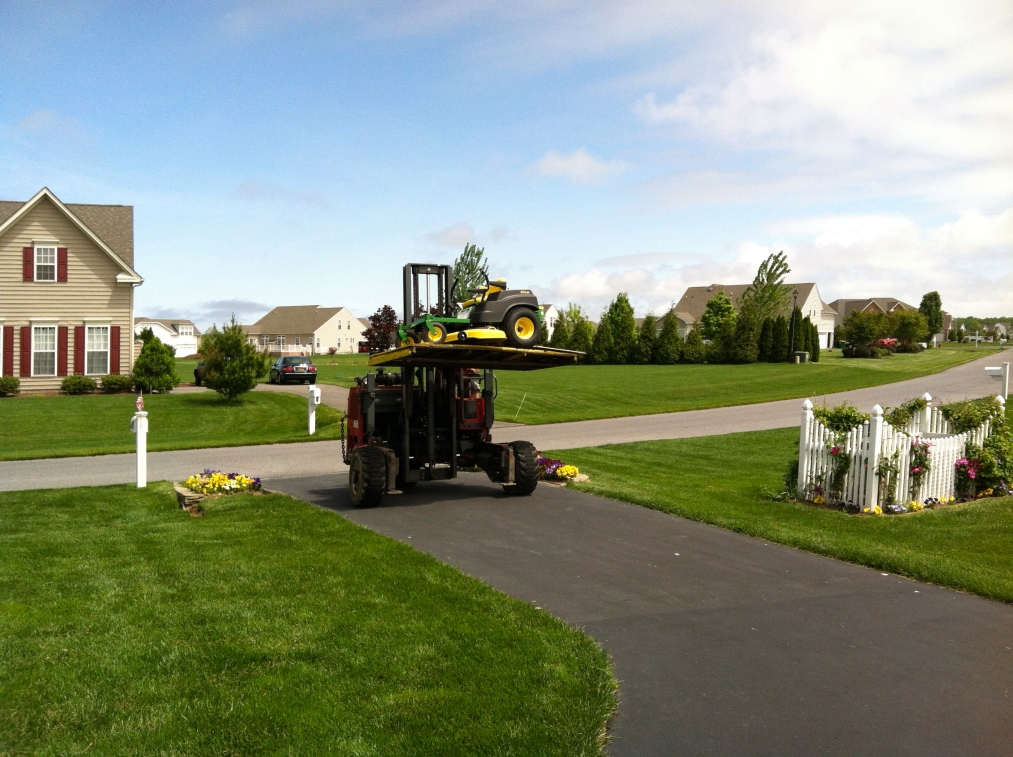 Now here is something funny.  Bill has no problem starting the tractor but he can’t get the hand of steering the tractor with those dual handle bars.  I have no problem with that, much to Bill’s surprise (and chagrin because he always has to be the butch one who knows all about THAT stuff and thinks I can only bake cakes).  Hey, let me tell you I can do some Butch Stuff too.  Not whole lot mind you (I don’t want to break my fingernails) but I can manage in a pinch.  I’m butch when I have to be.

So I took a spin around and even cut our neighbor’s lawn (they’re away on vacation).  Bill was so impressed that I fear that he is going to give me the lawn mowing job too.  Not so fast Bill.

Sometimes a simple, sincere “Thank you” is the best part about working.

As regular readers of this blog know I work parttime, two night a week at a small hotel in downtown Lewes, Delaware.  In my previous life, I worked as a trust operations manager at a major Philadelphia bank.  Since retiring ten years ago I began working parttime as a hotel front desk clerk.

Those of you who work with the public know that it can sometimes be frustrating.  Sometimes I wonder “Why am I doing this?”  Yet there are other times like this evening when I knew exactly why I am working in the customer service/hospitality business.  It is because my nature is to serve and please.

The way a stand up comedian get reinforcement by the laughter from his audience from a joke he tells or an actor receives applause, I get my reinforcement from a guest who looks me in the eye and says “Thank you very much Ron.”  Why it’s almost as nice as a raise.  (“Almost”, I said.  I’ll still take the raise.)

This afternoon when I came in on my shift at 3 p.m. I got a call from room 304.  The guest told me she didn’t have any glasses in her room.  I apologized for the oversight and told her I would take two glasses to her room right away.  She also asked if she could have “some milk or half and half” for her coffee.  I told her I would also take that up to her.

A few minutes later I knocked on her door.  After what seemed like an interminable length of time, she opened the door.  I handed the tray to her with the two glasses and the covered stryofoam cup of half and half.  I told her it was “half and half.”  She said “Whatever.”  Uh oh.

When I returned to the front desk I asked my co-worker “Is there a problem with 304?” (we usually refer to our guests by their room number – hotel talk).  He said “She’s not happy with her room.”  I said “What’s the matter with her room?”  He said “She doesn’t like the view, she wants a clearer view of the water.” Note:  Our hotel is located next to the Lewes-Rehoboth Canal and not all rooms have an unobsturcted view of the water/canal.

These guests were staying four nights and we are full this weekend (The Lewes Car Show) so I couldn’t offer them another room.

Later on, as I was passing through the lobby, I saw the couple sitting in the lobby reading newspapers.  I asked them if they had dinner and how was it.  The lady put down her newspaper, slowly looked up at me and said “It was fine and thank  you very much for asking.”  She seemed somewhat surprised that I even asked her.

I went back to my front desk and noticed that a room with a better view was available the next three days.   I offered the room to her (at no increase in cost, the room is more expensive because it is on the top floor with the best views and a king sized bed).  She looked at me again and for the first time I saw a smile come to her face like the morning rising sun.  She said “What is your name?”  I told her “Ron.”  She said “You know Ron, you’re the first person since we’ve checked in here that has shown an interest in our situation.  You’re the first person who cares. I thank you for that.”

I was a bit taken aback by the unexpected compliment and momentarily at a loss for words.  After all, this is my job to take care of our guests and to make sure they have a pleasant experience during their stay at our hotel.

She was reluctant to move to a differnt room because they were already settled into their room.  I offered to have one of our staff move their things to the new room with the better view.  Her eyes perked up at my suggestiong.  She said she would get back to me after she asked her husband.

A few minutes later she called down to the front desk and said “Yes, we will move.”  I said “Good! I’ll take care of everything.”

About fifteen minutes later I heard the elevator bell ring as it opened it doors on the first floor.  The same guest I was just talking too exited the elevator with a smile on her face.  She said “I just happened to look out our window and saw that my car light were on.  I’m glad I looked out.  There is a God!”

She turned off her car lights and came back in the door by the front desk.  She looked at me, again with that same smile on her face and said “Thank you for everything Ron and have a good night.”

And that folks is why I work. 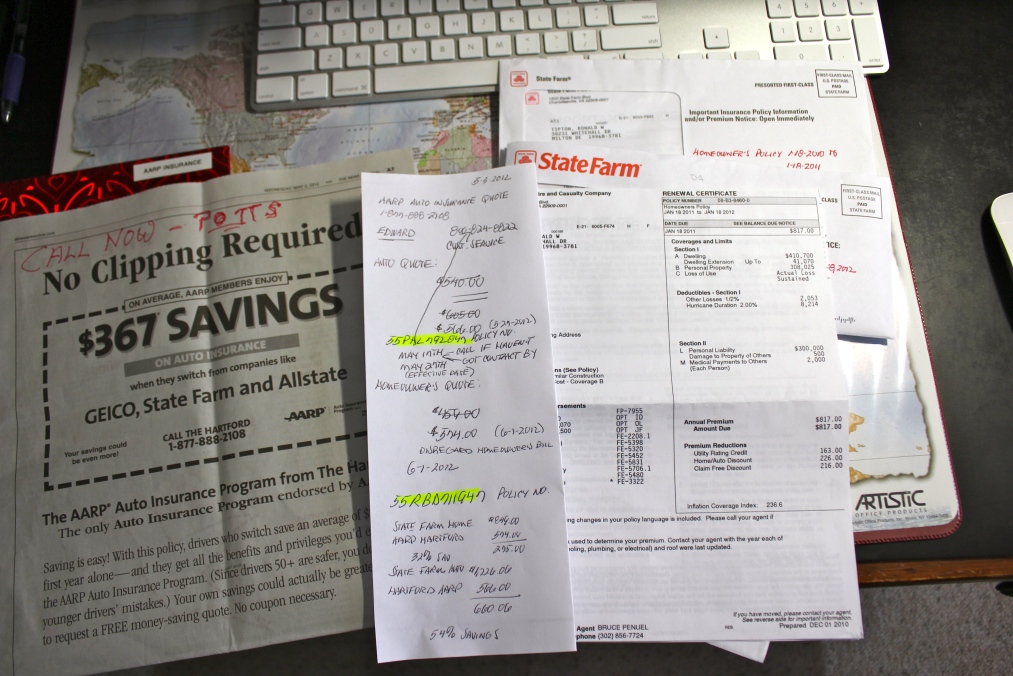 Yesterday I received notice of my auto insurance renewal.  The price went up again!

I expected my monthly premium to go up and it did, to about $88.00 a month.  My insurance is renewed every six months.  Each time my premium crept up.  My latest premium was $97.00 (I left off the pennies) a month.  So yesterday I was justifiably shocked when I received my new premium notice for $103.97 a month!  Now I was paying over $1,200 a year for auto insurance coverage.

Excuse me?  I have an excellent credit rating.  I haven’t had any accidents or moving violations.  I’ve never made a claim on my auto insurance.  And my rate goes up each six month interval?  Really?

Yesterday at work I check with my boss to see what he was paying for auto insurance.  He told me “around $800 a year.” His insurance also included his life insurance!  Like me he said he got a reduced rate because he bundled his homeowner’s insurance with his other insurance policies.  I do the same but still have high premiums.

Time to shop around for new insurance.  That’s what I did this morning.

I am a member of AARP (of course I am, I’m an Oldie Goldie) and AAA.  I called the AARP Insurance program from The Hartford.  I receive mailings all the time urging me to change insurance but I’ve always thrown them away, figuring they’re all about the same.  Oh how wrong I was.

I called the number for the AARP Insurance program from The Hartford this morning.  What a surprise!

I also got a quote for my homeowner’s insurance (for which I’ve never made claim) and they quoted me $574 versus $849 that State Farm was charging me.  That is a 32% savings!

Of course I signed up immediately.  They take care of all the paperwork.  I don’t even have to call State Farm to inform them that they were overcharging me.  All I have to do is sign the papers that The Hartford sends to me.

Being retired as I am now, I am living on a fixed income.  I have my part-time job to try and stay ahead of inflation and to indulge occasionally in a few little “extras”.  One of the main reasons I moved to Delaware was to get away from the ever increasing school taxes of Pennsylvania.  Now I had a new problem with my auto and homeowner’s insurance.  I just took care of that little problem this morning.

Thank God for competition.  At least I can buy some time now with these new insurance policies.

This is a good start to my day.

Me at my computer blogging away